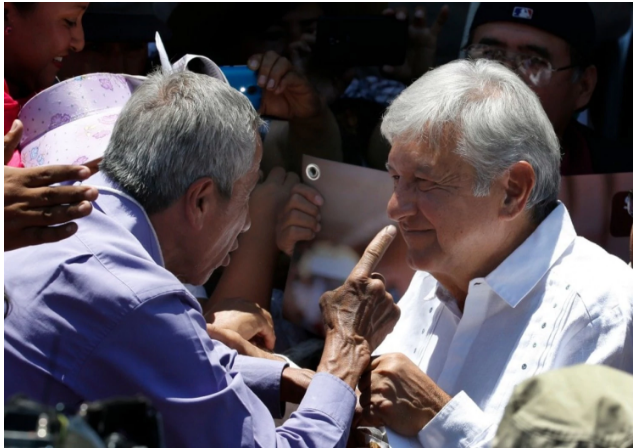 Suddenly, Mexico is being squeezed simultaneously by President Trump’s United States and Vladimir Putin’s Russia, each pursuing divergent interests but both, ironically, contributing to the same electoral outcome.

Mexican voters, according to U.S. national security adviser H.R. McMaster, are now being targeted by Russia’s election interference operations, just as voters in the United States, the Netherlands, Ukraine, Norway, Catalonia and elsewhere have been.

The news that Washington has detected Russian interference ahead of Mexico’s July presidential election was revealed last weekend by the daily Reforma, some three weeks after McMaster gave a speech at the Jamestown Foundation in which he noted, almost casually, that U.S. intelligence had picked up “initial signs” of Russia’s “sophisticated campaigns of subversion and disinformation and propaganda” in the Mexican election.

McMaster spoke mostly about Russia’s efforts across Europe, where he said Moscow deploys cybertools to inflame divisions, undermine confidence in democracy and undercut the strength of the European Union.

Russia’s ambassador to Mexico, Eduard Malayan, denied the accusations, just as other Russian officials have rejected similar claims by intelligence agencies in the United States, the Netherlands, France and elsewhere, which said Russia had actively interfered in their elections. Malayan had already done the same several weeks earlier, when rumors of Russian interference started circulating in Mexico.

McMaster gave no more details about what exactly Russia is doing in Mexico or how, precisely, it might be going about it. But judging by Putin’s other moves, one could surmise where Mexico’s elections would fit in his global strategic view. Putin has largely sought to weaken the West — the United States and Europe — and to discredit democracy. The twin goals bolster Russia’s global power relative to the West and strengthen Putin’s own standing at home. After all, if people living in democracies are disenchanted with the system, Russians are less likely to demand real democracy at home.

The news burst across Mexico as the presidential campaign is heating up, but already months ago, one candidate started gaining propulsion from abroad. With every reference to Mexicans by Trump during the U.S. campaign, the populist Andrés Manuel López Obrador, known as AMLO, saw his chances improve.

Trump, of course, has a long track record of insulting Mexicans. His plans to build a border wall to keep them out, while repeatedly stoking prejudice and mistrust by highlighting instances of crime by immigrants, haven’t helped.

That populist approach may have won Trump votes, but it also boosted López Obrador’s fortunes. The perennial presidential candidate, a leftist nationalist who has defended Venezuela’s catastrophic regime and won cheers by attacking Trump and the United States, saw his campaign catch fire with every Trump insult.

Mexicans joked that Trump had become López Obrador’s campaign manager. And now Putin may also be working to help the anti-American candidate’s cause.

Observers started noticing months ago that the Kremlin’s unofficial television network, RT, which is available in Mexico, started giving vast amounts of time to López Obrador’s main English-language spokesman, John Ackerman. Lopez Obrador recently announced that Ackerman’s wife will join his cabinet if he wins the election. And an RT program host even described Ackerman as “Our man in Mexico.”

Mexicans don’t need Russian social-media manipulators to tell them that their democracy is flawed and their politicians are prone to corruption. For that, they have their own eyes, they have their own media and they have López Obrador, who has been lambasting not only the United States but also official — and electoral — corruption for decades. But in an election that could turn out to be close (much like in the United States), a little help from Russians amplifying the message on social media could end up making a decisive difference.

With the main parties scrambling in the shadow of corruption scandals and the ruling Institutional Revolutionary Party (PRI) enduring the burden of President Enrique Peña Nieto’s dismal approval ratings, the polls show López Obrador and his Morena party in the lead. But the outcome is far from certain.

If López Obrador wins, Putin will have one more reason to flash a self-satisfied smile. That’s because López Obrador would not be good news for the United States.

Trump may be unhappy with Mexico, but the truth is that the United States and Mexico have enjoyed a friendly and mutually beneficial relationship, with cooperation in many important areas, including crime-fighting, border security and trade. That is likely to change under López Obrador, who would dramatically alter the tenor and content of the relationship.

The decision, of course, is up to Mexican voters. They have to look after their own interests. But now they have to do it with the disturbing knowledge that their fate is being influenced by not only the politics of their close neighbor to the north but also the digital proximity of the Russian cyber brigade.