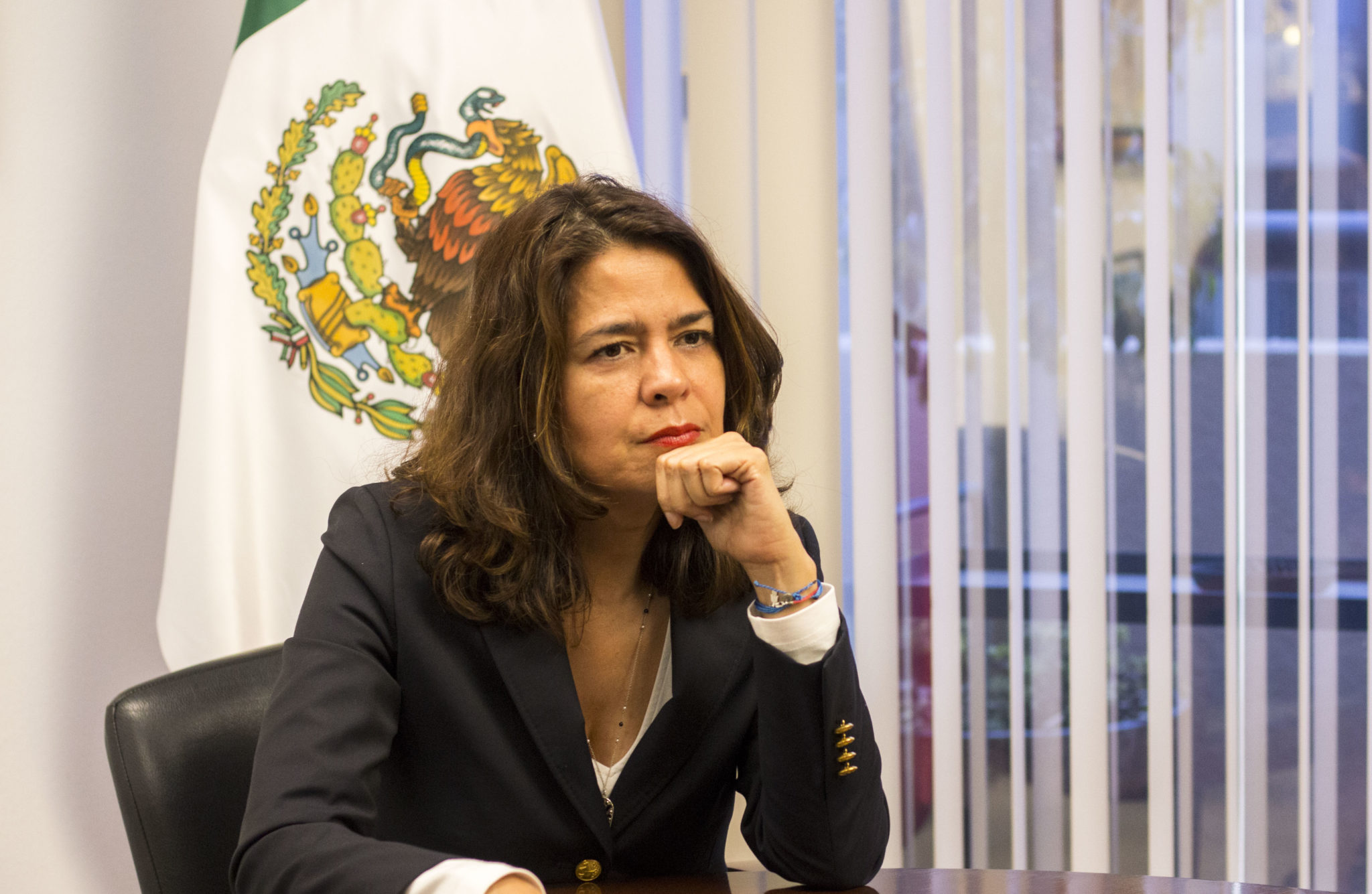 Marcela Celorio has worked in embassies in Israel, Belgium and Washington D.C. But representing her country as the Mexican consul in San Diego – just a short drive from Mexico itself – has been a far different experience.

Celorio said what strikes her about San Diego is the strength of the Cali-Baja binational community. She said the delineations between who’s a Mexican citizen and who’s a U.S. citizen are increasingly nebulous, and that people like those in the Deferred Action for Childhood Arrivals program, who are legally not U.S. citizens but spent their entire lives in the United States, have changed the way she thinks of citizenship and identity.

The binational nature of the region has made the role of the consulate here unique in the way it serves people of Mexican citizenship and Mexican descent on both sides of the border, and in its drive to maintain cross-border culture and business despite divisive rhetoric coming from the White House.

I sat down with Celorio to talk about how her role as a Mexican consul here has changed in the past year.

Can you start out by explaining the consulate’s role here in San Diego?

The main role, as with any representation abroad, is to represent Mexico and Mexicans. So we’re here. We’re authorities. We are the federal representation in San Diego County. … We have been doing mainly the traditional activities that have to do with providing citizen services: issuing passports, issuing the consular IDs, birth certificates, power of attorneys, promoting Mexico from the trade side, cultural side.

In the past few years, we have been evolving from those traditional functions to a more modern view of our activities, and that has to do with the consular diplomacy. Consular diplomacy means we are reaching out to all relevant actors in the county to promote the help to our community in order to empower them to help them navigate the American system. It’s very complicated for a Mexican that has a different culture to come to the United States and learn how to do things, so we want to make sure these people, who have been contributing to the American society with their work, with their children going to school – really hardworking people – that they have a voice and they can defend themselves. Because no matter if you are undocumented, you are a human being and in that capacity you have rights, and they have to be respected.

How has your role changed in the past year with the election of President Donald Trump?

Since we got the results on Nov. 8, I think that what has been changing is the uneasiness and the concern and the anguish of the people, of the Mexican community – not just the Mexican community because we have to remember that undocumented people are not just Mexicans, they are a lot of nationalities. … I always compare to last administration, where the deportation numbers were 2.7 million deportees and now we’re not seeing those numbers. But the speech, the intolerance, the anti-immigration speech. That has been what really has been making an impact. From the consulate general of Mexico in San Diego, we’re working with our allies. Our allies are within the civil society and are also within the authorities. We are fighting back and trying to convey the message to the community that in times of uncertainty, in complex times, we have to rely on and trust the institutions and the proper application of the law.

What has been some of the fallout and consequences locally of some of the policies and rhetoric of this administration?

We are lucky because this is a truly binational community, and we’re in California. You know there are a lot of initiatives going on in Sacramento that will help at the state level.

The border dynamic is completely different from how the capitals see us. Maybe in Washington D.C., maybe in Mexico City, they are crafting an initiative or legislation, but they are not fully aware of the big picture. And while they’re doing that, the dynamic in the region doesn’t stop. It just keeps on going.

We keep on living because we know each other.

When a Mexican citizen is arrested or detained for immigration-related offenses, what is the consulate’s role?

We are here not to encourage breaking the law.

Every person that is detained has the right to ask for the assistance of the consulate.

Every case is different. But, in general, we go to the authorities – we have good collaboration with the authorities – we go and interview this person and we can assign a lawyer depending on the case, or we can just stay vigilant so that when the order of deportation is taking place, their rights are fully respected.

What kinds of programs and resources are available to Mexicans who are deported to Tijuana to readjust to life there?

We are, the Mexican consulate, the only one along the border that have an office in San Ysidro that is embedded in [Customs and Border Protection]. From there, we protect and assist all these Mexicans that have to be repatriated or deported.

When they are deported, we have a program called “Somos Mexicanos” that the Ministry of the Interior is instrumenting, and from that place we are giving them like a kit with all the information about where to live, where to work, where to take the kids to school, how to open a bank account. All these challenges that you face when moving to another country because even though they are Mexican, they have been spending much of their lives here, so what they had to face in coming to the U.S., now they have to learn the system over there.

Increasingly you can see all these Mexican-Americans.

Last week, we went to the north part of the county and we took all these kids, 5-year-olds to 12-year-olds, to the theater. We had this movie called “The Book of Life” that talks about the Dia de los Muertos – the Day of the Dead – traditions. We were talking to them and I said, “You know, this is from Mexico and we want you to get acquainted with your roots,” and this little tiny kid, 5 years old, he raises his hand and says, “Hey listen, I am Mexican-American.”

For us, it’s a real challenge, and here at the consulate we have to have the sensitivity to recognize that fact.

Mexico, in the ‘90s, we recognized the dual and multiple nationality because we knew that there was a fact that a lot of Mexicans will be becoming Americans, and they have dual nationality.

You have to take a look where [people] have been living for the last years, where they have been working, where they have their roots, if you want to resolve a problem with nationality. For example, if someone is Mexican-American, but has been living in Mexico for 10 years, he has his family there, well Mexican, but he’d be American in legal terms.

It’s complicated, but I think that the world, not just regionally in the states and in Mexico, has to start to craft policies and initiatives that start recognizing this fact.