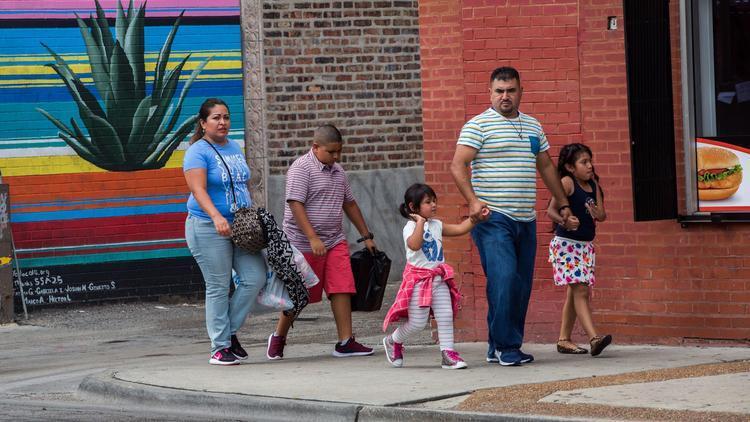 Latinos have surpassed other minorities in Chicago, including African Americans, in population, making it the second largest racial and ethnic group in Chicago after U.S. Whites, according to the most recent Census data.

“Hispanics”, the label invented and applied by the U.S. Census—which includes Latinos and Latin American descendants—now make up nearly a third of the city’s total population of 2.7 million residents.

Last year, 803,000 Hispanic residents were reported in Chicago, up 2 percent from 2015. The driving force behind the Hispanic growth are births and not immigration, as had traditionally been the case.

The African-American population, which has lost about 250,000 residents since 2000, has also declined considerably and it’s attributed to the lack of jobs and opportunities in Chicago, street violence, and climbing taxes.

Decades ago, Hispanics/Latinos were concentrated in the Southwest and Northwest sides of Chicago. Now this population is scattered throughout the city and out into the suburbs.

According to a report compiled by the University of Illinois at Chicago (UIC) and Metropolitan Family Services, the communities with the largest number of Hispanics/Latinos are:

Nearly 75 percent of Hispanics in these communities are Mexican and Mexican American, followed by Puerto Ricans, Ecuadorians, and Guatemalans, respectively.

Some historically Latino neighborhoods are also facing gentrification and displacement, such as Logan Square, which has lost more than 20,000 Hispanics, and Pilsen, which has lost approximately 10,000 Mexicans and Mexican Americans since 2010.

Further demographic data demonstrate that education level, annual income, access to public services, affordable healthcare, job training, and employment opportunities have not kept up with the population’s growth and needs, and Hispanics lag behind other ethnic groups in these areas.

“Latinos are present throughout Chicago’s neighborhoods and have unique social, economic and housing successes and challenges. I hope that this data will be used to advance discussions about the policies that affect them,” said the author of the UIC report, José Miguel Acosta-Córdova.