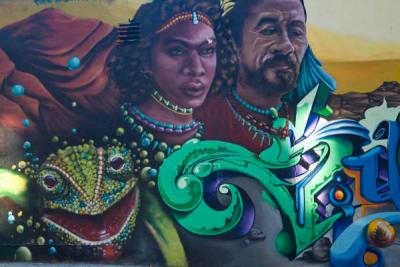 Chicano Park in San Diego is a lasting memorialization of the San Diego Chicano community’s struggle against marginalization; a fight to retain a sense of community and a beloved neighborhood. The murals in Chicano Park visually narrate these struggles and the local, national, and international heroes who fought for justice, recognition, and equality for Chicanos in San Diego and beyond. 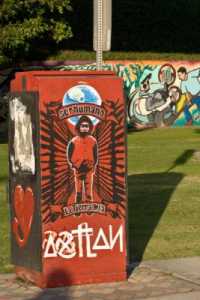 Since the late 19th century, the area southeast of downtown San Diego, known as Logan Heights and Barrio Logan, has been home to many of San Diego’s Spanish speaking people. A huge influx of Mexican immigrants settled in the area following the Mexican Revolution in 1910. The area was extensive; the original neighborhood reached all the way to the ocean, with waterfront access for residents. 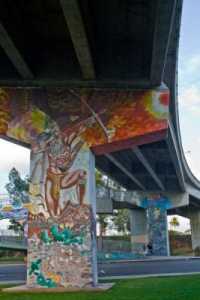 During World War II, the community’s direct access to the waterfront was entirely cut off by expanding naval bases. In the 1950s, local zoning laws reclassified several residential areas into industrial zones. As a result, junkyards, car repair shops, and other industries injurious to a serene and cohesive community aesthetic sprang up in the area. The largest upheaval came in the 1960s when construction for the I-5 freeway severed the Barrio Logan community in half. A few years later, the neighborhood was further fragmented by the building of the Coronado Bay Bridge. More than 5,000 homes and businesses were destroyed in order to make way for the freeway and the bridge, and more than half the population was displaced, forced to move elsewhere.

Distressed that their once charming neighborhood had been carved up and industrialized, some Barrio Logan neighborhood activists searched for ways to recover and revitalize a sense of community. An idea that gained ardent local support was to create a community park, and even before the completion of the Coronado Bridge, representatives of the community requested from the City Council the permission and resources to build a park. In mid-1969, the land that was proposed for the park was leased to the city by the state and, later in that same year, a new state law was enacted that allowed areas near freeways to be used for community recreation. At the end of the year the city acquiesced to the demands to build a park. However, when bulldozers appeared on April 22nd, 1970, residents were shocked to learn that the land was not being cleared for the construction of a park, but instead for the building of a large parking lot for State Police vehicles. Residents were also informed that the modest brick building on the site that they had hoped to use for a community center was instead to be converted for a State Police station. Believing that the city had broken their promise to build a park, many residents decided it was time to take immediate and forceful action to save the land for a park and prevent further damage and insult to their community. 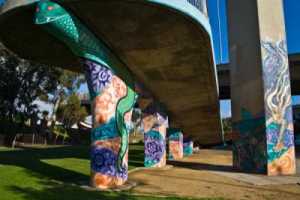 Local resident Mario Solis, who came to be known as the Paul Revere of Barrio Logan, went door to door to spread the word about the unfolding events that threatened the prospects for a park. He spoke out at a Chicano Studies class at City College and was able to recruit students to help reclaim the land. Throughout the day, as many as 150 angry residents and local activists gathered at site to confront the bulldozers. Several residents formed a human chain around the bulldozers. Others began planting flowers and cacti. The Chicano Park Steering Committee was formed to promote the cause of building their community park. In the evening, Councilman Leon Williams, who enjoyed wide support from the African-American and Latino communities and was the first black person to sit on the city council, held a meeting at the Barrio Logan community center. Other officials in attendance were Jacob Dekema, district manager for the Division of Highways, D. T. Donaldson, the supervising inspector of the highway patrol, Captain Vincent J. Her, and Lt. Larry Watching of the highway patrol, Pauline Des Granges, city director of parks and recreation, and Clinton McKinnon of the San Diego Urban Coalition. At the meeting, officials were told that the demonstration would continue until a compromise was negotiated. Jose Gomez, vice-president of San Diego City College and spokesman for the new Steering Committee, informed them that “the only way to take that park away is to wade through our blood.” Artist Salvador Torres offered his vision of turning the bridge pylons into works of art reflecting Mexican-American culture. 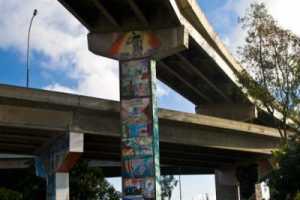 During the occupation, women prepared meals for the demonstrators. Others came in from as far away as Los Angeles and Santa Barbara to support the cause. More trees, cacti, and flowers were planted. After twelve days, San Diego’s assistant city manager Meno Wilhelms announced that an agreement with the state had been reached. The city finally agreed to search for another location for the parking lot, as long the residents called off their occupation. Two months later, after much debate between the city and the state, the land was allotted for Chicano Park.

In 1973, Salvador Torres’ idea of covering the drab concrete pillars and walls with murals was put into action. Due to efforts of local artists and artists from Mexico, Los Angeles and Sacramento, Torres’ dream became a reality over the next seven years (For a complete list of artists and murals, go to www.chicano-park.org and click on “Murals”).

In 1977, a Kiosko (kiosk) in the style of a Mayan Temple was built as a center for dance and music performances, weddings, music, and a variety of other sorts of gatherings. Local icon Ramon “Chunky” Sanchez even wrote a theme-song, the Chicano Park Samba, to musically relay the story of their treasured park. With much love and appreciation pouring into Chicano Park, it quickly became the hub of Chicano culture in San Diego.

Though other issues have arisen and new struggles have been endured, to this day Chicano Park stands as a reminder of the pride and solidarity of our city’s Chicano community. It is a testament to the power of community action over bureaucracy. It serves as a resonant reminder to all minorities that to be an American citizen does not require the relinquishing of cultural identity. 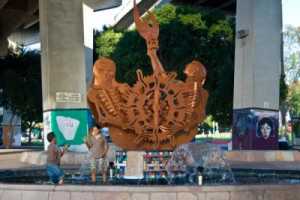 Today, sightseers can enjoy over 70 murals that adorn the pillars and walls of the bridge and nearby freeway. Throughout the year, numerous events and performances are held at the Kiosko. One of the largest San Diego celebrations of Dia de los Muertos is held in early November of each year. On the weekend closest to April 22nd, the history and heritage of Chicano Park is celebrated and commemorated at the park. 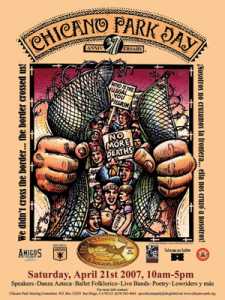 Admission to Chicano Park Day festivities is free, and visitors can enjoy a wide variety of musical shows, dances, poetry, speakers, low-rider displays, as well as a variety of booths that sell food, crafts, and merchandise.