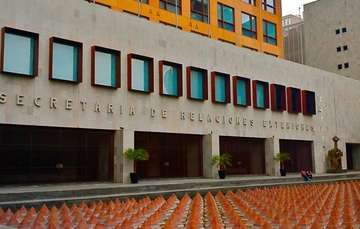 In a meeting with the Anti-Defamation League (ADL), Mexico’s foreign secretary emphasized his commitment to working for the protection of the rights and dignity of the Mexican community in the United States and pledged to redouble his government’s efforts to fight discrimination and prejudice.

Secretary of Foreign Affairs Luis Videgaray Caso met on May 11 with Jonathan Greenblatt, ADL CEO and National Director, in Mexico City, where he and other government officials briefed League leaders on the state of the bilateral relationship between the U.S. and Mexico and discussed other issues of mutual concern. The foreign secretary emphasized the importance of continuing a fluid dialogue between the governments of the two countries and non-governmental organizations on bilateral issues.

Mr. Greenblatt and Marvin Nathan, ADL National Chair, toured Mexico last week with a delegation of top ADL leaders on a mission of solidary with the thriving Mexican Jewish community. In a series of meetings with community officials and government leaders, they discussed ongoing efforts in the U.S. and Mexico to address anti-Semitism and all forms of hate and discrimination.

“Chancellor Videgaray shared how strongly he believes in the importance of working to promote equal access to education, religious freedom for all Mexicans and to protect the rights of immigrants and refugees in the U.S.,” Mr. Greenblatt said. “He described the many resources that the government of Mexico has devoted to the defense and protection of Mexican nationals living in the U.S. We are deeply appreciative of his government’s commitment to ensuring fair treatment of immigrants and combating prejudice against Mexican nationals living across the border.”

In the past two years ADL has worked closely with the Mexican government to address issues of bias and discrimination in the U.S. In coordination with the Mexican Embassy in Washington, D.C., ADL has offered three workshops about hate crimes, bullying, extremist groups, the anti-immigrant movement and anti-bias education to more than 150 diplomatic consuls from all of the Mexican consulates in the United States. And ADL’s 27 regional offices continue to provide assistance to consulates serving the 35 million people of Mexican heritage living in this country.

In the meeting, Chancellor Videgaray said he would like to see ADL and the Mexican government expand their work together on initiatives that contribute to reducing discrimination and promoting democratic values.

The Anti-Defamation League, founded in 1913, is the world’s leading organization fighting anti-Semitism through programs and services that counteract hatred, prejudice and bigotry.  Follow us on Twitter: @ADL_News