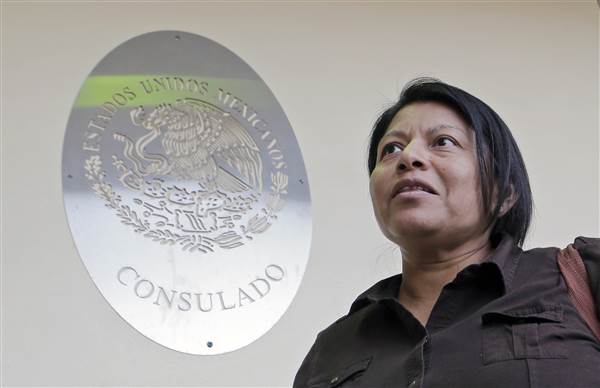 The difference is today we have hindsight and hard data that tells us not to shut that door.

Illegal immigrant Divina Ciriaco, of Mexico, talks to a reporter, at the Mexican Consulate, Friday, March 3, 2017, in Miami. Ciriaco, who has lived in the U.S. for 20 years and works as a housekeeper, is gathering all the documents she would need for her U.S. born son to go along with her if she is deported. Alan Diaz / AP
Then there was the 1902 Gentlemen’s Agreement that barred Japanese migrants from entering the United Stats. The final nudge that shut the door was the 1920s Quota Acts that all but halted Southern and Eastern European immigration.

America’s already locked immigration door was reinforced with more deadbolts during the Great Depression and WWII. In the 1930s, thousands of Mexicans and Mexican-Americans were rounded up, stuffed into boxcars or placed on ships and sent back to Mexico. Then there were the Japanese internment camps, followed by the outright refusal of entry to thousands upon thousands of Jewish refugees fleeing concentration camps.

As a nation these are episodes that we are collectively not proud of. They contradict our liberal democratic founding and they didn’t make much economic sense.

Opinion: On International Women’s Day, We Stand For Immigrant Women and Families

The most significant piece of this policy is the overhaul to the visa and refugee granting system. To be more specific, this overhaul will aim to put into place permanent restrictions — a pretty big push toward closing the immigration door.

There’s the Mexico and Latin America targeted measures. The idea here is to preserve American jobs and keep immigrants from taking them. One hundred years ago, these immigrant “job-takers” were Chinese or Japanese, today they’re Mexican or Latin American.

We can spend billions on a wall, Border Patrol agents and deputizing local law officers to round up undocumented immigrants to protect American jobs.

But the real culprit of illegal immigration is nowhere to be found – American employer demand. If the demand for undocumented labor continue,s immigrants will find a way to make it to the United States. If there’s no demand, immigration will recede, just as we saw during the Great Recession. American economic demand slowed and so did the supply of Mexican labor.
Then there are the national security measures — restricting refugees and immigrants from certain countries. In 1940, President Franklin D. Roosevelt cited spy concerns for justifying his rejection of Jewish refugees fleeing Nazi persecution. And the outright exclusion of Asian immigrants 100 years ago coincidentally entailed groups of non-Western Judeo-Christian peoples.

The sealing off of the American immigration door today, as it was 100 years ago, is one cloaked in false claims. Isolating ourselves will not solve our economic problems, make us safer or make us more effective on the global stage.

All extremes are bad. Just as an open borders policy is not a good idea, neither is a closed border policy. The real solution is a difficult one, finding a compromise between the two extremes. We should learn from our mistakes, rather than seek to repeat them. Otherwise, we will set ourselves back a century.