Immigrants are more likely than U.S.-born workers to be employed in a number of specific jobs, including sewing machine operators, plasterers, stucco masons and manicurists. But there are no major U.S. industries in which immigrants outnumber the U.S. born, according to a Pew Research Center analysis of government data.

All told, immigrants made up 17.1% of the total U.S. workforce in 2014, or about 27.6 million workers out of 161.4 million. About 19.6 million workers, or 12.1% of the total workforce, were in the U.S. legally; about 8 million, or 5%, entered the country without legal permission or overstayed their visas. (Roughly 10% of unauthorized immigrants have been granted temporary protection from deportation and eligibility to work under two federal programs, known as Deferred Action for Childhood Arrivals and Temporary Protected Status.)

There are two main ways to look at the kinds of work people do: by industry (that is, the business their employer is engaged in) and by occupation (the kind of work they do on the job). To get a sense of the work immigrants to the U.S. do most frequently, we relied on 2014 workforce estimates by Pew Research Center. The estimates, based on augmented data from the Census Bureau’s 2014 American Community Survey, cover all workers ages 16 and older who reported being in a civilian industry or occupation, including both lawful and unauthorized immigrants.

Private households were the most immigrant-intensive “industry” in 2014. Of the 947,000 people working for private households, 45% were immigrants, with lawful immigrants slightly outnumbering unauthorized immigrants. The industries with the next-biggest shares of immigrant workers were textile, apparel and leather manufacturers (36%) and the farm sector: A third (33%) of the nearly 2 million agriculture workers in 2014 were born outside the U.S. The overall U.S. workforce – U.S.-born and immigrant (both lawful and unauthorized) – is concentrated in a relatively small number of industries. But while the 10 biggest-employing industries are the same for U.S.-born and lawful immigrant workers (and in almost the same order), the employment pattern among unauthorized immigrants is markedly different.

And as with industries, the distribution of occupations differs significantly between lawful and unauthorized immigrants. More than half of all unauthorized immigrant workers in 2014 were in just four occupational groups: construction and extraction; building and grounds cleaning and maintenance; food preparation and serving; and production. In contrast, those four groups accounted for only about a quarter of lawful immigrants’ jobs. The biggest occupational sectors for lawful immigrant workers were office and administrative support, sales, and management (each with 9% to 10% of the total). 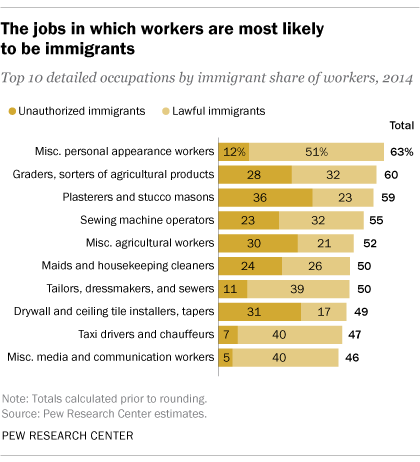 Looking at specific occupations, an estimated 63% of “miscellaneous personal appearance workers” (a category that includes manicurists and pedicurists, makeup artists, shampooers and skin care specialists) are immigrants, the highest share of any occupation. Immigrants account for about 60% of graders and sorters of agricultural products as well as plasterers and stucco masons, 55% of sewing machine operators, and about half of maids and housekeepers, tailors and dressmakers, and miscellaneous agricultural workers.

The immigrant share of the U.S. workforce has grown over time. Back in 1995, according to Pew Research Center estimates, immigrants (lawful and unauthorized) made up about 12% of the total civilian workforce. The lawful-immigrant share has risen gradually, from an estimated 9% in 1995 to 12% in 2014; the unauthorized-immigrant share rose from about 3% in 1995 to 5% in 2005, but has been roughly stable ever since. Immigrants, and their U.S.-born children, are projected to drive growth in the nation’s working-age population for at least the next two decades.

Views on immigration’s impact on U.S.-born workers have shifted significantly over the past decade, according to a Pew Research Center survey released last year. Americans then were almost evenly divided, with 42% saying the growing number of immigrants working in the U.S. helps American workers and 45% saying it hurts workers who were born in the U.S. In 2006, 55% said having more immigrants hurt U.S. workers, with just 28% saying it helped them.