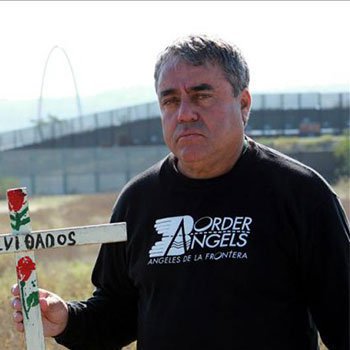 Through the slots of a massive steel fence protruding into the Pacific Ocean, a sandy beach in Tijuana comes into view. It’s filled with throngs of chatting teenagers and young men doing pushups and pullups before the backdrop of a Mexican home painted in the American stripes of red, white and blue. On the other side, in San Diego, there’s just a handful of Americans who walked more than a mile and a half down closed, flooded roads and an empty beach in Border Field State Park to peer with curiosity into Mexico on a recent Saturday.

The contrast becomes starker as the Americans reach steel bars on the beach. A U.S. Border Patrol vehicle zooms onto the sand and an agent inside directs the spectators to a section of the fence above that they are allowed to approach, in a place called Friendship Park. In that closely monitored area, border patrol allows Americans to speak with Mexicans from 10 a.m. to 2 p.m. on weekends through bars covered with thick wire mesh, meant to prevent items from being passed.

There’s room, though, for the tips of pinky fingers, and some touch through the mesh, desperate for any kind of physical contact with loved ones on the other side.

This meeting place on the border is the most interesting and important stop for me on a recent 10-day exploration of California. As I drive further south, radio broadcasts are dominated by news of presidential executive orders calling for more deportations, a border wall, and travel bans from seven predominantly Muslim countries.

THE POLICY – EVEN THOUGH IT’S MORE DRACONIAN NOW AND SCARY – IT’S ALWAYS BEEN A POLICY OF SEPARATION HERE (IN THE U.S.).

I’m eager to hear what people on the border think of this news. I approach the only pair I see in Mexico not already engaged in conversation with someone on the other side of the fence, a friendly American couple who moved to Tijuana about a year ago.

Nancy and Robert Kincaid moved to Mexico largely because of work opportunities – an aunt owns a coffee shop in Tijuana – and more affordable housing close to the beach, but a contentious U.S. presidential election season also had a hand in their decision to leave.

“It’s crazy,” Nancy says of divisive U.S. political rhetoric. “It’s one of the main reasons why my husband and I decided to move.”

In Tijuana, Friendship Park looks like a park. Around the Kincaids, families sit at picnic tables and a mariachi band plays in a plaza beside a busy city street. On the American side, there are armed guards and a barren slab of concrete, but toward its end I spot some plants and two gardeners. One of them is Dan Watman, coordinator for the Binational Friendship Garden of Native Plants.

The Spanish teacher lives in Tijuana and works across the border in Imperial Beach. He started the garden, which grows on both sides of the fence, in 2007 through a group he founded called Border Encuentro that aims to build friendships and find common interests between people in both countries through activities held at the fence, such as poetry readings and salsa dancing lessons.

CONNECTION AND FRIENDSHIP CAN CONTRIBUTE MORE THAN ANYTHING ELSE TO SECURITY OF THE REGION.

In Tijuana, the binational garden includes vegetables for anyone hungry and in need of food. Lettuce is harvested weekly for free Sunday salads at the fence.

The garden grows within three circular plots intersected by the border fence: three half circles in each country. Rocks with wishes written upon them rim one of the circles. Watman points out white sage, a lemon berry bush, California sunflowers and cactus.

“The message is that the environment doesn’t have any borders,” Watman says. “What’s native here obviously is native over there, and more than anything, that connection and friendship can contribute more than anything else to security of the region.

“I would really like it if that kind of clicked for people, that once you get to know somebody, you feel more secure. So this is a space, mostly symbolically, that represents that – although it literally happens sometimes. People get to know each other through the fence and through cross-cultural barriers.”

The hope that these kinds of connections could be made at the fence was behind the creation of Border Field State Park, dedicated by then-first lady Pat Nixon in 1971. Photos from the dedication ceremony show Nixon reaching through a simple barbed wire fence to shake the hands of smiling families in Mexico.

The tall, thick steel fence that stands at this location today looks nothing like the one there in 1971. It was renovated in the early 1990s and again in 2009, when a second metal fence closer to San Diego was also added. The reinforced fence prevents vehicles from driving through the barrier and also aims to deter the transfer of drugs and money across the border.

“As a result of this wall, more than 11,000 people have died since 1994, mainly because they (immigrants coming from Mexico) were forced to cross in the desert, and they die from lack of water,” Morones says. “The U.S.-Mexican border is 2,000 miles. A third of it has a wall.”

EVERY SUMMER, MORE PEOPLE DIE BECAUSE OF THIS WALL THAN THE ENTIRE HISTORY OF THE BERLIN WALL.

Border Angels leaves water in the desert for near-death immigrants and organizes events at the fence where separated family members in the U.S. and Mexico are allowed to hug each other for a few minutes under Border Patrol supervision. Last year, the Border Patrol allowed two of these events at the border between San Diego and Tijuana. Morones hopes they’ll be able do three this year.

He’s greeted by a number of people he knows across the fence in Tijuana, including a journalist from Japan and a group of human rights activists. One man talks about shelters in Tijuana adopted by U.S. churches, and Morones shows them a T-shirt he made featuring a Christian cross and the question: “Who would Jesus deport?”

Morones says his upbringing and Catholic faith inspired him to found his organization 31 years ago. He says his parents “always taught me about loving your neighbor.”

“The majority of people in this country are still of that positive spirit; they don’t agree with Trump. … We’ve got to stand up to all these things that he’s doing. I’m encouraged by people like (Republican U.S. Sen.) McCain and other people on his side of the aisle that are standing up and saying, ‘Hey, you can’t have torture,’ ” Morones says, referring to President Donald Trump’s statement that he believes torture works as a prisoner interrogation method.

IF THE PEOPLE REALLY WANT TO DO THE RIGHT THING, NOBODY CAN STOP IT, NOT EVEN JUST ONE GUY.

Near Morones stands U.S. Border Patrol Agent Saul Rocha. He and other agents in his sector are responsible for protecting 60 miles of the U.S.-Mexican border, of which 46 miles has some type of fence.

Rocha was born and raised in Mexico and became a U.S. citizen at age 20. He served two combat tours in Iraq as a Marine before joining the U.S. Border Patrol. In his current work protecting the border, he thinks of the Oath of Allegiance he took to join the military, to “support and defend the Constitution and laws of the United States of America against all enemies, foreign and domestic.”

He chats amiably with visitors at Friendship Park.

“We all like to be treated with respect and dignity,” Rocha says, “regardless of where you’re from or who you are.”

TREAT EVERYONE WITH RESPECT AND DIGNITY.

I walk back to my car with a young Mexican American couple – a dental technician named Andreas and housewife named Naomi – and their 10-year-old son, Saiid. They drove from Los Angeles to visit with Andreas’ ailing parents for a couple hours on the other side of the fence. Andreas misses them terribly and calls them on the phone several times a day. He describes their love as “vitamins” that help him go on.

Andreas drives to Friendship Park every other weekend to visit with them through the fence. He wishes he could hug them, but seeing their faces is some comfort.

Andreas says his work visa was stolen but that he’s close to becoming a U.S. citizen.

IF THE PEOPLE REALLY WANT TO DO THE RIGHT THING, NOBODY CAN STOP IT, NOT EVEN JUST ONE GUY.

His son was “really sad” the night Trump was elected president. “The wall thing” worries the 10-year-old, who sees the proposed construction of a U.S.-Mexican border wall as meaning the countries are no longer allies and that war could erupt between the U.S. and Mexico. Saiid hopes America will get “to a point where we create more allies than enemies.”

To do that, Saiid suggests helping others “in their need.” He says some people in need include the hungry, impoverished, and people who have been attacked.

Saiid is soft-spoken and sweet. His inflections make his answers sound like questions, and in many ways, they are. At 10 years old, he’s watching the adults around him carefully to understand how to think and act.

I ask how we can create a better world, and Saiid’s father chimes in: “Unity, unity.”

If Andreas had an opportunity to talk to Trump, he says, he would “try to make him understand about humanity.”

Andreas says he’d be OK if Trump built a large border wall – just please let him hug his parents on the border from time to time.

“Everyone can work to get what they want,” Andreas says, “but when you’re talking about this – about family here and family on the other side of the wall – that’s something different.”